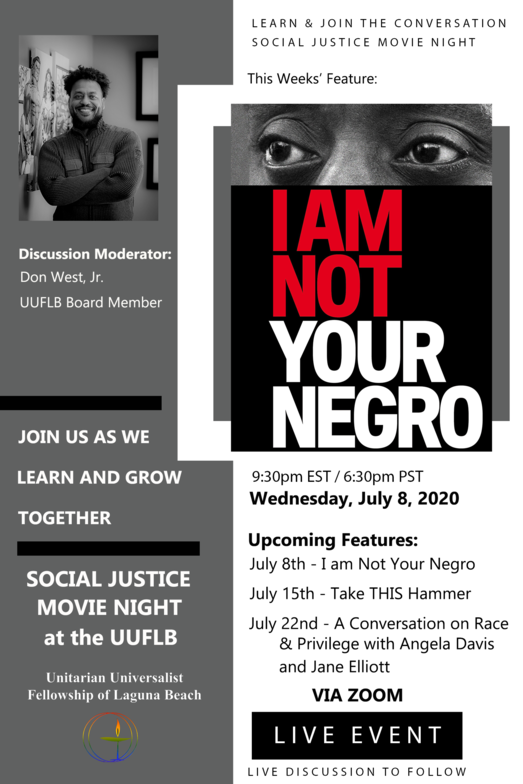 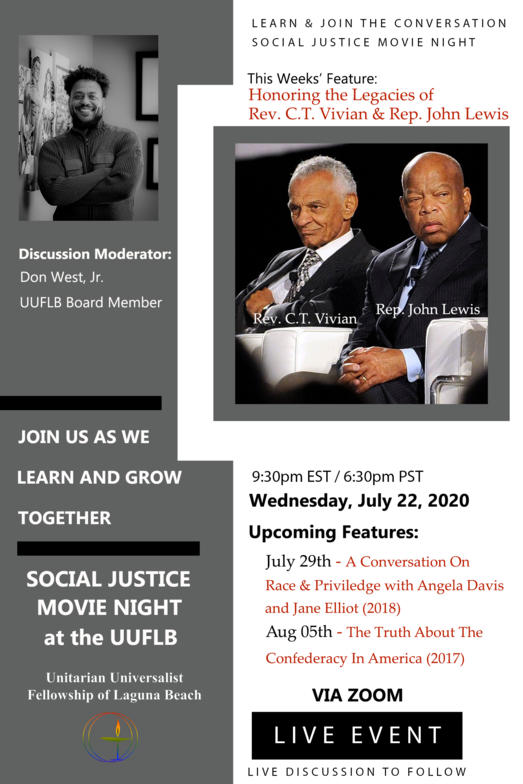 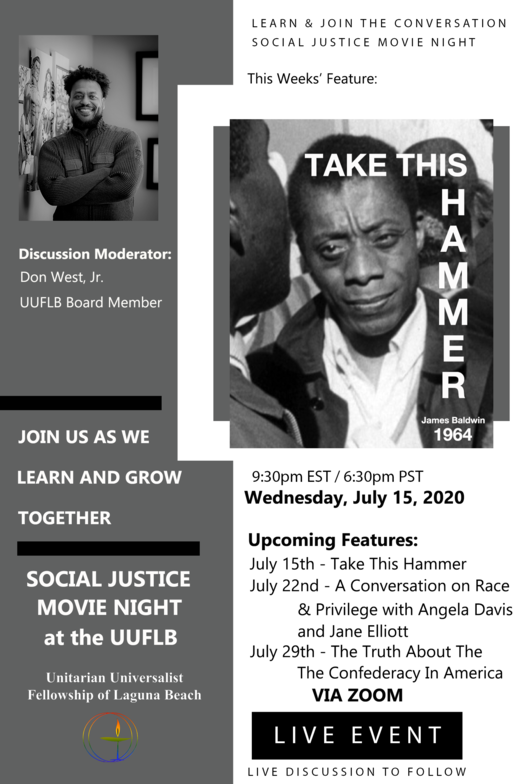 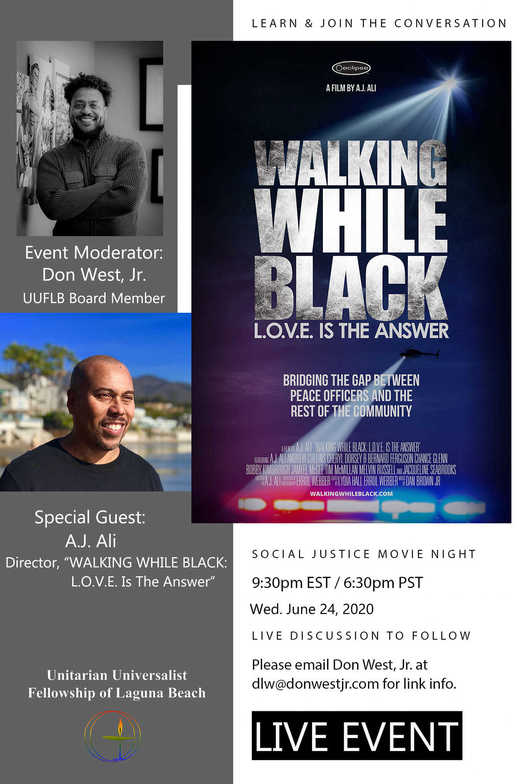 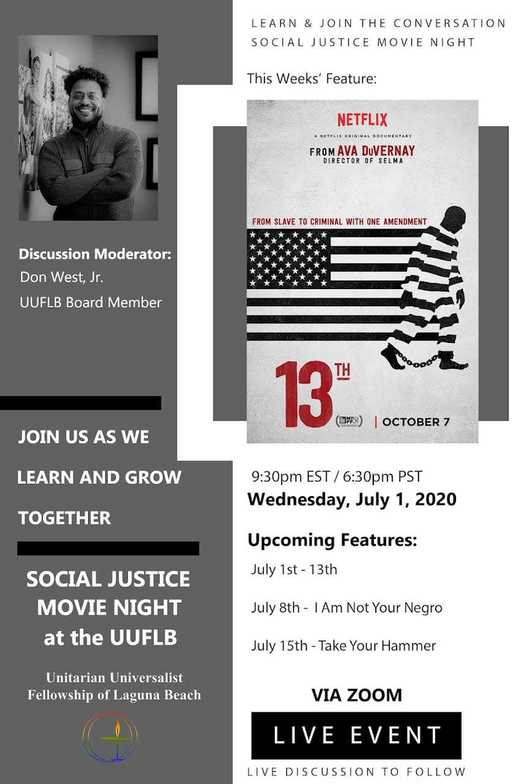 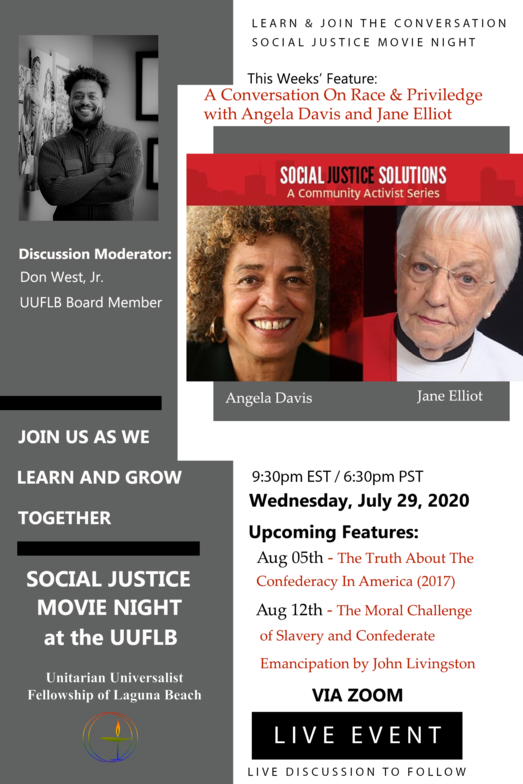 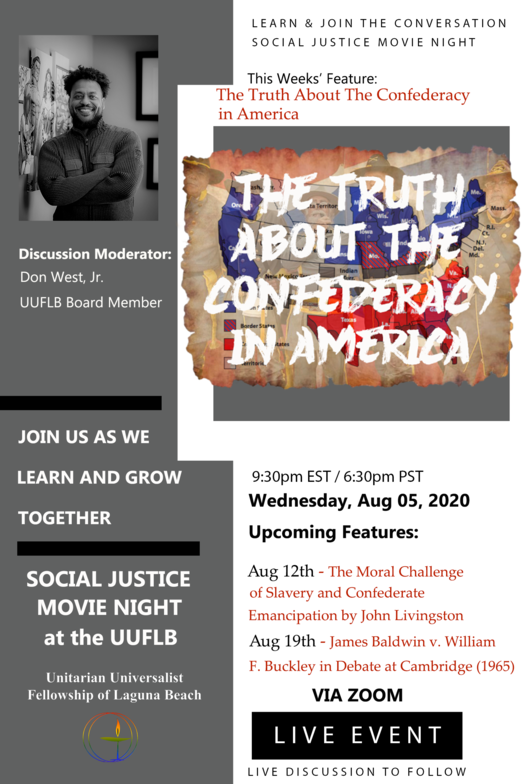 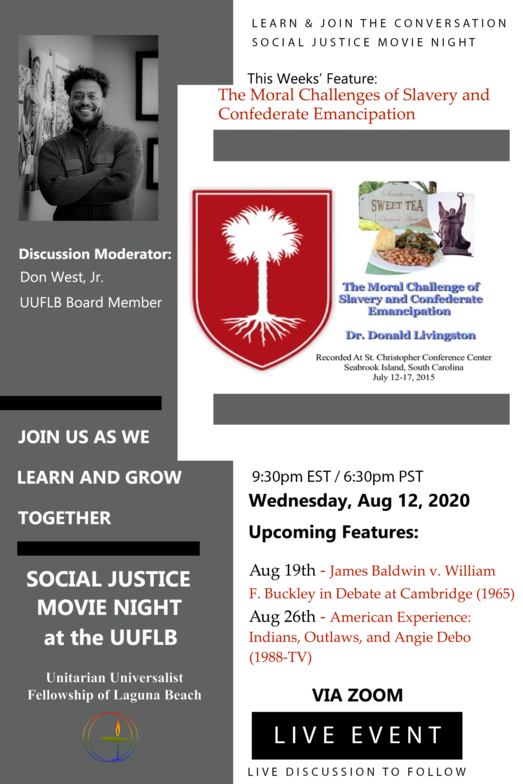 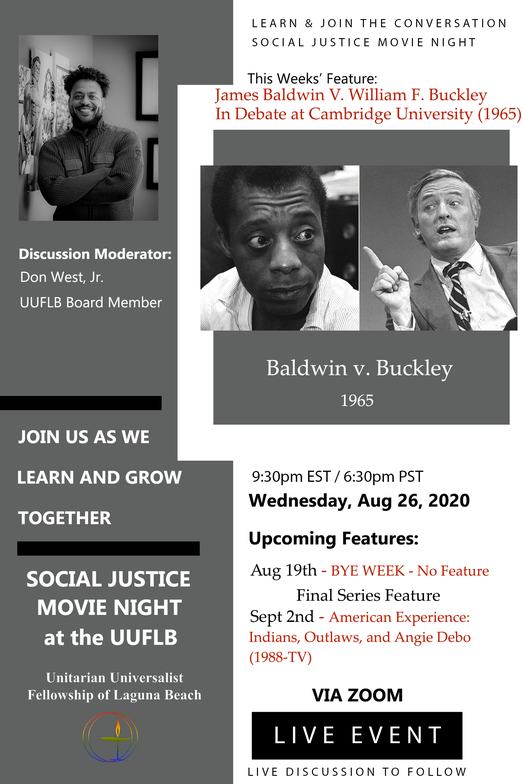 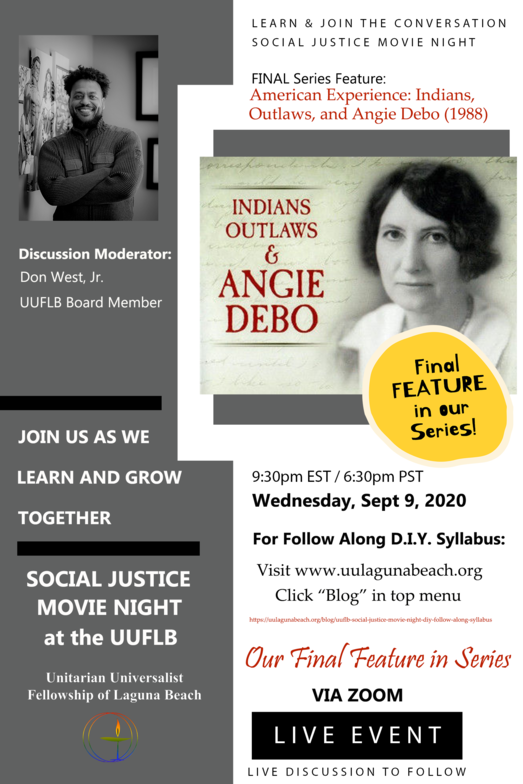 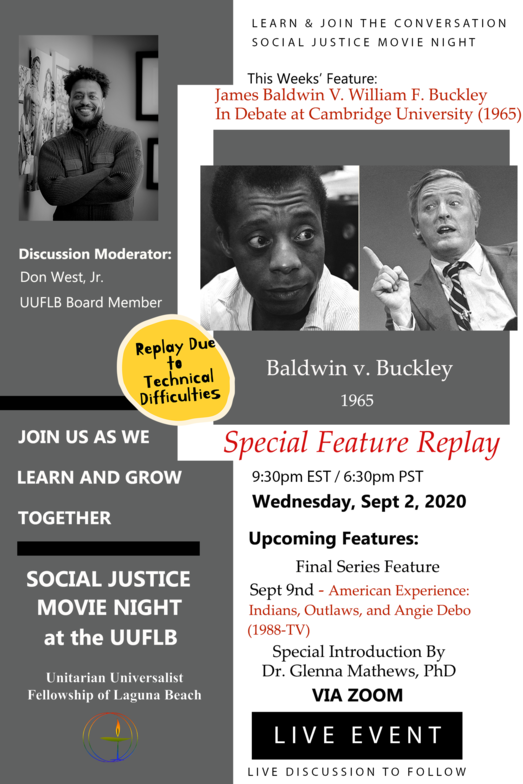 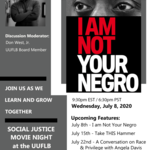 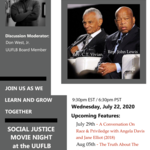 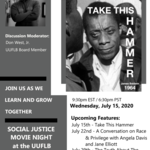 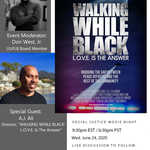 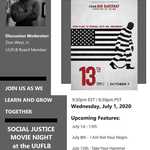 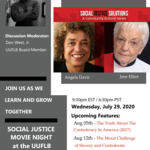 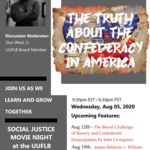 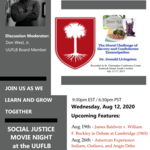 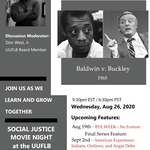 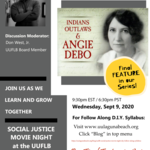 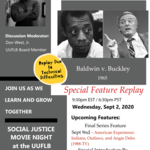 In Our own ongoing effort to honor all the martyrs and victims of police violence, we here at the UUFLB sought a way to live the change we desire to see in the world.  Following the murder of George Floyd; a national flashpoint in an ongoing string of police brutality and injustice specifically against blacks and other peoples of color; in the spirit and for the very reason former NFL quarterback Colin Kaepernick took a knee during the 2017 season, this film series was born in June 2020.

LEARN about each other.  OPEN our hearts to each other.  VOLUNTEER to be a part of the solution in each other's life.  EMPOWER each other to do the same.  (Adopted from our third feature, WALKING WHILE BLACK: L.O.V.E. Is The Answer and its Creator, A.J. Ali.)

Learning about the issue(s) at hand is the first step we saw as a path to impactful citizenship as UU's.  To this end, we began a film and discussion series on June 10th curated and moderated by UUFLB Board Member, Don West, Jr.  The post-screening discussions of these films have been moving and emotional experiences causing shifts and growth for all in attendance.

This film series has concluded.  When running it occured on Wednesday evenings at 6:30pm. Each film was followed by a discussion moderated by UUFLB board member, Don West, Jr. The series was been well-attended, and may be rerun in the near future if there is adequate audience interest.

The following feature list represents our best effort to embark on an earnest journey and conversation together seeking truth and better understanding of ourselves.  We invite you to leave us comments and thoughts so you can join in this virtual conversation and growth experience.

(Week 3) June 24, 2020 - "WALKING WHILE BLACK: L.O.V.E. Is The Answer"  (2017) Directed & Produced by A.J. Ali. The documentary features interviews with police officers, faith leaders, educators, activists and others."L.O.V.E." is Ali's acronym for: Learn about the community and the people in it. Open your heart to the humanity of people in the community; Volunteer yourself to be part of the solution; and, Empower others to do the same.

(Week 4) July 1, 2020 - "13th"  (2016) A documentary directed by Ava DuVernay, director of “Selma”. The 13th Amendment abolished slavery, but also included a provision that justifies the use of forced labor by convicts. The film makes the case that this inclusion is one explanation for rising prison numbers and continuing domination of people of color. (See Original Post on Facebook)

***BONUS Supplemental Material*** Prior to the start of our Week 6 Feature, former criminology professor and regular weekly series participant, Steve Bloch shares his own independent research in response to the films from Weeks 3 & 4 looking at crime and policing in the USA.

(Week 5) July 8, 2020 - "I Am Not Your Negro"  (2016) Raoul Peck, director. A powerful, probing, and career-spanning synthesis of James Baldwin’s ideas and activities. Baldwin wrote that "not everything that is faced can be changed, but nothing can be changed if it is not faced." The film is based on an unfinished manuscript by Baldwin titled, “Remember This House”, as read by actor Samuel L. Jackson. It was to be a radical narration about race in America, told through his own account of the lives and assassinations of his friends: Medgar Evers, Malcolm X and Martin Luther King, Jr. The film draws on the completed pages of the novel and rich archival material, to explore and bring a fresh, radical perspective to the current racial narrative in America. Join us Wednesday, as we face truths about our nation's history of racial inequality and its relevancy in today’s world.

(Week 6) July 15, 2020 - "Take This Hammer"  (1964) Director Richard O. Moore  was inspired by ’the sense of moral urgency’ of James Baldwin’s essay, “Letter from a Region in My Mind,” in The New Yorker. Made during the Birmingham campaign led by Martin Luther King, Jr. and S.C.L.C., the film follows Baldwin as he interviews black residents in San Francisco. Whereas Raoul Peck's film offered a powerful, probing, and career-spanning synthesis of Baldwin’s ideas and activities, Moore's is "local, immersive, and immediate".

(Week 8) July 29, 2020 - "A Conversation of Race & Privilege with Angela Davis and Jane Elliott" (2018) A Conversation on Race and Privilege with Angela Davis and Jane Elliott is the latest installment of the student-led Social Justice Solutions series. Each year, we invite activists, thought leaders, and the community to explore action-oriented strategies to affect social change. This year we are honored to host two luminaries who have long been on the front lines of pushing the national conversation on race and racial justice forward.

***BONUS Supplemental Material*** Prior to the start of our Week 8 Feature, former criminology professor and regular weekly series participant, Steve Bloch returned to share his additional independent research in response to discussion questions following his Part 1 presentations of findings following the films from Weeks 3 & 4 looking at crime and policing in the USA.

*** BONUS Supplement Material ***  On August 2, 2020, Dr. Glenna Matthews, PhD, spoke to the UUFLB on "The Confederacy in California."  The information shared by Dr. Matthews on California's history is a timely and informative supplement to the detailed account by Attorney Jeffrey Robinson in our Week 9 feature.

(Week 9) August 05, 2020  "The Truth About The Confederacy In America" (2017) Originally a live stream, Jeffery Robinson, the ACLU’s top racial justice expert, discusses the dark history of Confederate symbols across the country and outlines what we can do to learn from our past and combat systemic racism.

*** BONUS Supplement Material ***  Following up on some of the comments of Attorney Jeffrey Robinson in our Week 9 feature, our minister, Rev. Lee Marie Sanchez located and shared a link to an excellent article, "This is what reparations could actually look like in America" written June 23, 2017 by Chuck Collins.

(Week 11) August 26, 2020 James Baldwin v. William F. Buckley: A Lengendary Debate From 1965  In 1965 at the University of Cambridge, two of the foremost American intellectuals were challenged with the question: ‘Has the American Dream been achieved at the expense of the American Negro?’

(Week 11 REPLAY) September 2, 2020 James Baldwin v. William F. Buckley: A Lengendary Debate From 1965  (Due to technical difficulties on 8/26 our community decided to replay this feature for the benefit of those unable to connect on 8/26.)

The following titles have been recommended by our regular attendees to the Wednesday night series.  Each has a valuable piece of an infinite puzzle of knowledge in our quest to build a beloved community together.